skip to main | skip to sidebar

Weekend Contest: Win a Copy of the Sold Out 'Duncan the Wonder Dog'

Comics Alliance is running a contest to win what the title of this post is talking about so I thought I'd use my neglected blog to make an entry. Multitasking, bitches!
As an aside, this makes me feel like Ralphie writing his theme in desperate hopes to get that air rifle. Hope Laura Hudson doesn't tell me I'll shoot my eye out.
Hard to figure out which non-speaking animal is my favorite since LOCKJAW AND THE PET AVENGERS came out, but I'm going to go with: Robin Robin, Robin's pet Robin in TINY TITANS 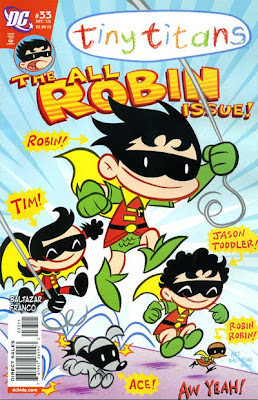 .
I imagine that given the ability of speech, his first words would be "AW YEAH, PET CLUB!" Maybe followed up with, "Wait, which Robin is mine?"
Posted by Jon Hex at 11:50 AM No comments: 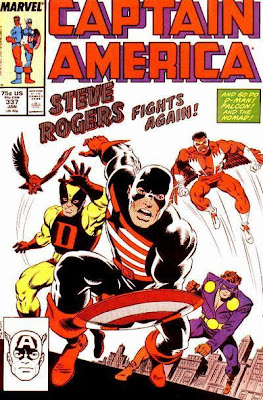 ...Captain America went emo and no one called him out on it?
To be fair to the people of the late 80's, the term "emo" hadn't been invented yet, but that is completely what happened to Steve Rogers. Back in '87, Rogers became distrustful of the government after a high ranking senator turned out to be an operative of the Secret Empire. When the Commission on Superhero Activities demanded Rogers come back to work as a government agent, he let go of the government owned Captain America costume and went into action as the black-clad The Captain.
This being the 80's you'd think they were trying to make Cap dark and gritty, but that was reserved for the new Captain America John Walker. Walker started off levelheaded, then went completely off the rails, killing loads of people before Rogers smacked him down. 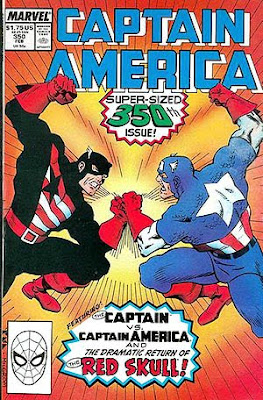 No, Rogers' black costume was to show his disillusionment with the government he held so high. 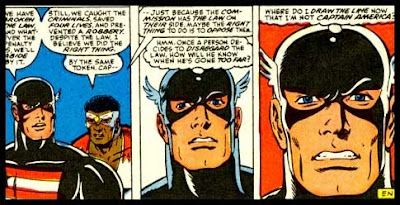 This is Sad Cap. Still kicked ass, though. He is the Super-Soldier.
Posted by Jon Hex at 5:32 PM No comments: 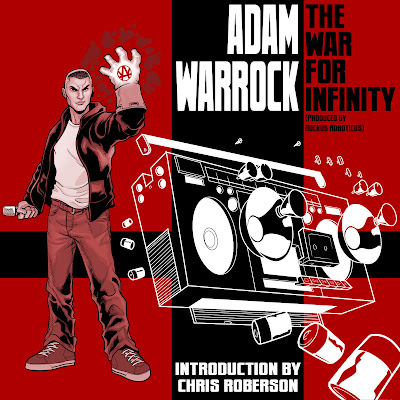 The War for Infinity
Artist: Adam WarRock, featuring Tribe One
Producer: Ruckus Roboticus
Geek fandom/culture has seen an explosion in popularity in the past ten years and with it, a trend of blending geekdom with other influences. While geek hip hop is not entirely new, Adam WarRock’s The War for Infinity may be the first time it was exceptionally brilliant.
Adam WarRock is the alter ego of Eugene Ahn, who left a law career to devote himself full time to hip hop. After listening to Infinity, you will agree it was for the best. The lead track, I Am Him, tells the backstory of the character Adam WarRock and certifies WarRock’s geek credentials to anyone who gets the reference. It also serves as prologue because the album (with the exception of a few tracks) is a story in rhyme, each serving up a chapter in the battle between WarRock and his archenemy Demonos (played by Tribe One).
WarRock has an impressive way with words. His voice stays clear, keeping the story from taking backstage to the stunning beats laid down by Ruckus Roboticus. Tracks like Heroes Requiem show off his storytelling ability, which is a rarity in mainstream hip hop. Requiem not only name-drops dozens of superheroes and iconic character, but presents them in a character-true cosmic battle sequence. Crooked Deal shows a Faustian deal with allusions to shady record company practices.
The strongest songs are when WarRock and Tribe One play off each other, a meta battle of words between characters and artists. Battle (Introductions) is a cosmic rap battle that only serves to fuel Demonos’ rage and give a glimpse of the awesomeness of Battle (Finale), the ultimate showdown between the two cosmic adversaries. It feels like a sonic mega event and you will listen to it again and again.
Some may be put off by the idea of a story concept album, but shouldn’t be. This is hip hop as it when meant to be: a demonstration of a love, whether it’s of a people, a culture, the streets or the way stories are presented. For an even deeper experience, drop the cash for the Deluxe version, which contains exclusive remixes of songs from WarRock’s Tracklog, his musical sketchbook offered free on his website AdamWarRock.com. Listen to the track log, buy the album.
Rating: A+ An engaging story backed by superior beats.
Purchase The War for Infinity CD at http://adamwarrock.bigcartel.com/product/the-war-for-infinity-cd
Purchase The War for Infinity CD/Digital Deluxe Download at http://adamwarrock.bandcamp.com/album/the-war-for-infinity-deluxe-edition
Posted by Jon Hex at 5:48 PM No comments:

I only realized NYCC was coming around when I read Adam WarRock's post on his set with Kirby Krackle at the NYC Nerd Rock Festival. It wasn't that long after SPX, so there wasn't a lot of time to plan a trip to one of (if not) the most popular destinations in the US, but I tried to rally the troops. Troops had other he plans, then the weekend & Saturday passes for the con sold out. Always next year, right?
Enter James Rambo, a friend of mine who works at Victory Comics in VA. Victory set up a booth at NYCC and had an extra professional pass. As soon as Rambo offered, my mind was set and I decided I was going, sans plan. I hopped an early morning (cheaper) train and was in NYC an hour before the con started. It reminded of SDCC circa '06, and had a lot of cool booths set up and interesting merch being sold, like the new Steve Rogers tee and disco lightsabers. I spent a few hours just wandering around and talking with Rambo and Julian Lytle, who had a table in Artists Alley.
I was able to buy a copy of The War For Infinity from Euge (Adam WarRock) after running into him between show floors. He is a cool guy and still talked to me after making the worst pun ever using his name. He saw Chris Claremont and HE brought up how bittersweet it was to see the man, forever cementing my high opinion of Euge. Then I ran into Jen Vaughn who was at the con just to visit, mostly. I met her at SPX when she was selling Adam WarRock tees she designed. For those who don't know her, I'm sorry about that, because she's awesome. We met up with David Wolkin of Comics Alliance and wandered around the con saying hello to Jen's friends before the Comics Alliance panel started. She gave a nice bio before getting to each person, so I didn't have to ask what they did or stand there like a prop.
As we passed the signing row looking for Marvel artists, David mentioned how much he didn't like the whole celebrity culture. Jen and I kind of threw it back in his face ten minutes later by asking Scott Adsit to pose with us when we spotted him by the entrance. I was like, "Scott Adsit!" He turned but was a few feet away and suddenly Jen was next to him like a ninja. She handed him copies of her mini-comic to make it less likely for him to blow us off. Told you she's awesome. Anyway, the three of us got to the panel, where Euge and Kevin Church were already seated. It went something like this: http://www.comicsalliance.com/2010/10/15/comicsalliance-panel-video-nycc-2010/ I met Chris Sims face-to-face and got to crack a joke in a public forum. WIN. The con winded down after that. I picked up OCTOPUS PIE: THERE ARE NO STARS IN BROOKLYN from Meredith Gran at the Dumbrella booth. She remembered my face from SPX and I was glad someone remembered my face without confusing me for someone else.
After a bad first impression with the NY subway system, I made it to the Nerd Rock Festival and met up with Euge. We then went over to meet up where Chris Sims, Kevin Church, Robin Kimball, Benjamin Birdie, and Jen had posted up for the show. Robin did an interesting thing with her ears and glowsticks that I got a pic of. Sticks with you. It was quite a fun time and Kirby Krackle rocked way more than I was expecting (I was there for Euge). With Euge's set over, we broke apart and I decided to stay for the rest of the show. Not the best decision. The rest kind of sucked. But altogether, it proved to be one hell of a Saturday and the best decision I've made since deciding to stop watching HEROES.
Posted by Jon Hex at 1:54 PM No comments:

...that I worked for Marvel and they still owned the license to G.I. Joe, because I would make this happen:

I Lesbians The Leaked THOR Trailer! 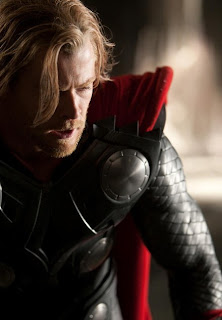 I have no idea if the video is still up but here the link be: http://thetvrealist.com/gossip/Thor-Comic-Con-Trailer-3145978.html
What you can expect:
- Muscles: Chris Helmsworth hit the gym. Hard. I think it may have fell over.
- Agent Coulson: It seems as though Clark Gregg will be getting screentime equivalent to both IRON MAN movies combined.
- Kat Dennings: I don't know who she plays and do not care. MORE KAT DENNINGS!
- The Warriors Three: Badass!
-Helmets: Worry not, fanboys. Not only is Thor sporting his trademark winged accessory, but brother Loki brings the horns.
- Hammer Swinging: Because it's not a party if it ain't got that swing.
-Lady Sif: Hot, but still...KAT DENNINGS!
Posted by Jon Hex at 2:02 PM No comments:

For the past few months, I have been whittling down my monthly pull list. Not due to budget constraints, but because a lot of books were starting to suck. The majority of those books were from DC Comics.
After War of the Supermen, I was looking forward to having Superman back on Earth, being Super and what not, but as anyone who read Superman #700 can attest, that is not the case. So, I was wondering if I'd be dropping the other books in the Superman family. I dumped Adventure when it became nouveau-Golden Age Legion of Super-Heroes; I was getting it because I thought Superboy Connor would be the series star. Action Comics was staying on because Paul Cornell's Wisdom and Captain Britain and MI:13 were brilliant, and making the book about Lex Luthor is inspired. But what about Supergirl? 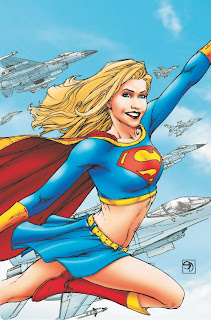 I have mixed feelings about Sterling Gates run. While he was building a solid foundation for the character, every so often Gates would have Supergirl do something so incomprehensibly stupid, I wanted to smack him AND her. Add that to the fact that I wouldn't be reading about Superman at all for at least a year, I couldn't think of a reason to really stay with this title. Then this happened: 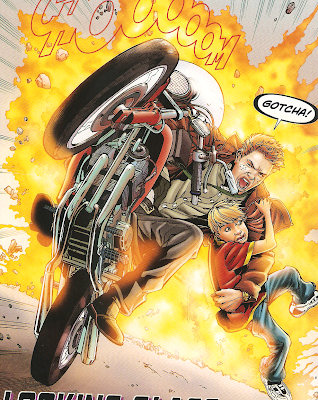 Welcome to The Ranting

These Guys I Know Of 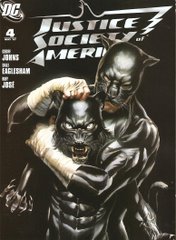